The Hampton-Seabrook Estuary is a shallow, tidally dominated, barrier beach system, The watershed encompasses 47 square miles, and includes the towns of Hampton, Hampton Falls, North Hampton, Stratham, Seabrook, Exeter, and Kensington, NH, and Salisbury, MA. The Estuary receives freshwater inputs from Tide Mill Creek to the north, the Taylor and Hampton Falls Rivers from the northwest, Brown’s River and Cain’s Brook from the west, and the Blackwater and Little Rivers from the south. Unlike the Great Bay Estuary, the Hampton Seabrook Estuary is dominated by salt marsh habitat. In fact, the Estuary contains over 1,800 hectares (4,000 acres) of tidal marsh. In addition, the Estuary supports many other important coastal habitats including the most productive softshell clam beds in the state; important roosting, feeding and nesting grounds for shorebirds and saltmarsh sparrows; as well as remnant sand dunes. As a result of the important ecological services provided by the Hampton-Seabrook Estuary, it was listed as a conservation focus area in The Nature Conservancy’s Land Conservation Plan for New Hampshire’s Coastal Watersheds (Zankel et al. 2006). The Hampton Salt Marsh was registered as a Prime Wetland, with approval of the Town’s voters, in 2009. 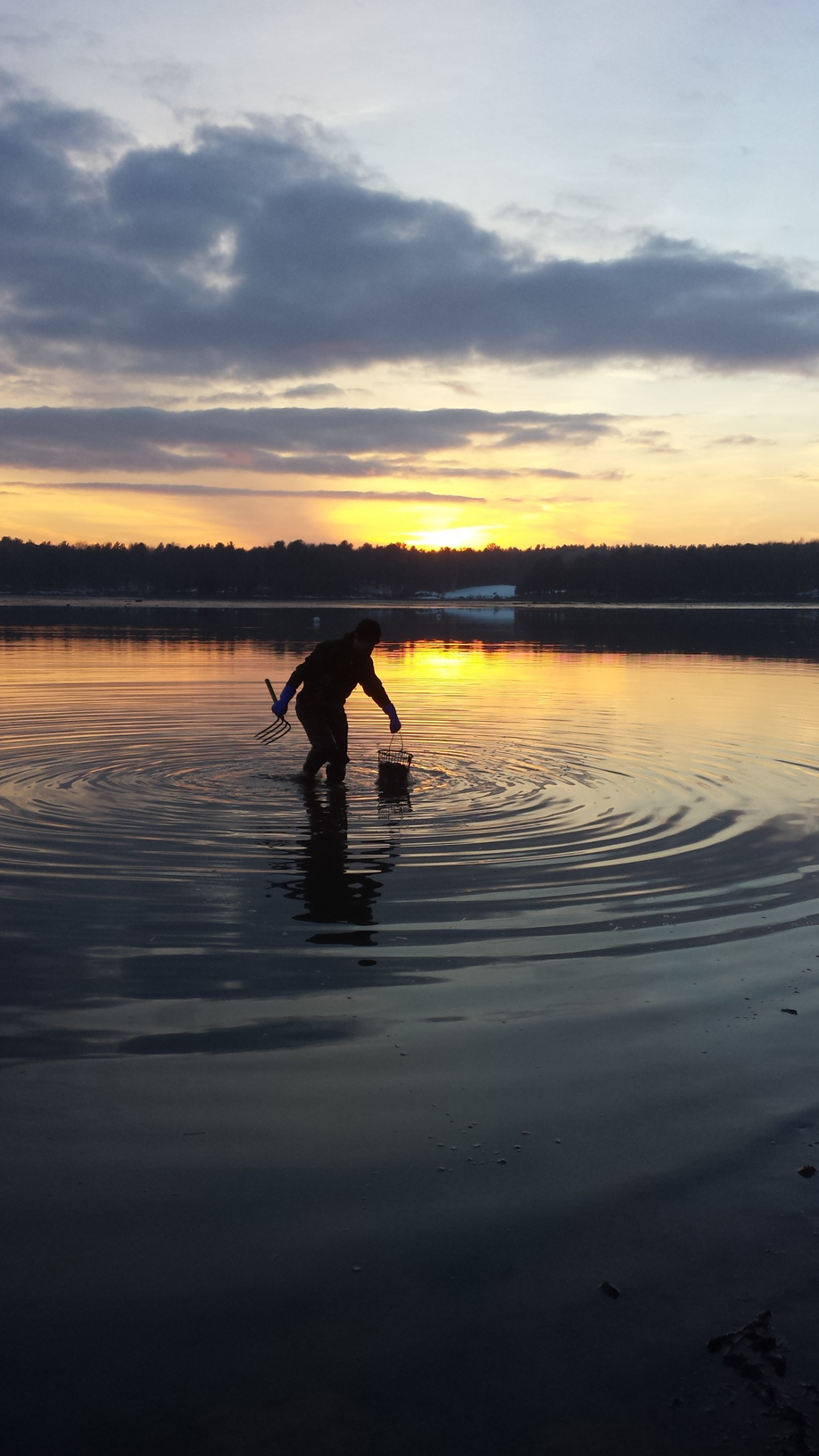 The history of land use in the Hampton-Seabrook Estuary dates back at least 4,000 year to native American settlements. From the few remnants of these settlements that remain, it is clear that Native Americans relied on the Estuary for its rich finfish and shellfish resources. In the early 17th century, European settlers were attracted to the Hampton-Seabrook Estuary by the large expanse of saltwater marsh. Salt marsh hay (Spartina patens) was considered a valuable food source for livestock. Salt hay could be harvested relatively easily and at a low cost due to the fact that expensive manure and fencing was not needed. In fact, it was considered so valuable that each of the settlers of Hampton received an expanse of salt marsh in their land grant so that they could take advantage of the salt hay. In addition to nourishing livestock, the extensive marshlands provided abundant food resources for colonial settlers including shellfish, finfish and waterfowl.

Although the European settlers valued the salt marsh, their use of it was not without impacts. heavy pasture use resulted in the high density of ditching that is still seen in the marsh today. By cutting ditches to drain the marsh, it was thought to sustain the abundance and improve the quality of the salt hay as well as increase the abundance of black grass (Juncus geradii), another valuable marsh grass used as feed. Salt pannes were reduced in these systems not only by cutting ditches to connect them to the drainage network, but also because the dredge spoil from ditching was deposited in the salt pannes to reclaim them as high marsh.

Along with exploiting the marshlands for food, the early settlers constructed sawmills, windmills, grist and fulling mills along the rivers and creeks of the Hampton-Seabrook Estuary, the first of which was built as early as 1640. Dams were erected to harness the energy needed to drive these mills, and in so doing, resident and migratory fish movement throughout the stream network became impeded.

Overtime, salt hay farming declined as uplands were cleared of forests and farming methods became more efficient and cost-effective. By the early 1900s, salt hay farming ceased in the Hampton-Seabrook Estuary and the marsh was no longer perceived as valuable. Development of salt marsh for commercial and residential interests quickly followed. By 1930, the majority of Hampton Beach was developed, resulting in the destruction of both marsh and dune habitats. As the area developed into a popular summer resort, the abundance of mosquitoes produced in the marshes became a problem that needed to be addressed. In the late 1930s, additional ditches were cut into the marsh to drain it of potential mosquito breeding habitat, further altering the marsh drainage patterns, vegetation and density of pannes. Unfortunately, the small fish that preyed on the mosquitoes lost their habitat as well.

Historically, the shoreline of the Hampton-Seabrook Estuary was quite dynamic. The rapid development of the dunes and marshes, as well as the construction of the mile-long bridge at the turn of the 19th century, served to harden and decrease the dynamic nature of the shoreline. The jetties along either side of the inlet, installed in 1930, further decreased shoreline movement. As the narrow channel connecting the Estuary to the ocean filled with sediment, it required dredging, first conducted in 1965, to maintain a navigable inlet. The inlet is currently maintained by the U.S. Army Corps of Engineers and due to the high rates of sediment transport and deposition within and around the channel, maintenance dredging is required approximately every 5 years.

From the National Oceanic and Atmospheric Administration (NOAA), this suite of educational resources can help students in any grade, in the classroom or home-schooled, learn about estuaries through hands-on learning, experiments, fieldwork, and data explorations. This is a great opportunity to explore and learn about the Hampton-Seabrook Estuary that is right here, in our back yard.

What is an Estuary?

An estuary is a partially enclosed body of water along the coast where freshwater from rivers and streams meet and mix with salt water from the ocean. Estuaries and the lands surrounding them are places of transition from land to sea, and although influenced by the tides, they are protected from the full force of ocean waves, winds, and storms by such landforms as barrier islands or peninsulas.

What Types of Animals Live in Estuaries?

Many types of animals are found in estuaries. In fact, the complex food web found in an estuary helps to support an amazing diversity of animals. The decaying plants are eaten by microorganisms (animals so tiny you need a microscope to see them.) The microorganisms are eaten by small invertebrates (animals without backbones.) Fish, like carp and stickleback, then eat the invertebrates. Many of the fish we eat depend upon estuaries. They are sheltered places where fish can have their young and the young fish can grow before moving out into the open ocean. Without estuaries, the number of fish in our oceans would decrease greatly. Occasionally, water in certain areas of the estuary can dry up and all that is left is a mud flat. It may seem like there is no life in this mud flat at all, but there are all kinds of mussels, shrimp, worms and other invertebrates living in the mud. Often you can see birds probing the mud with their beaks looking for a tasty meal.

What Types of Plants Live in Estuaries?

The estuary is a hostile environment for most plants because salt dominates. A few grow further back on the shore, where they live in a fluctuating environment of sea water and fresh water. These plants must cope with:

varying exposure to sunlight and wind

What Role do Estuaries Play in Earth’s Cycles?

How are Estuaries Connected to My Life?

Estuaries are important parts of our lives; interconnected to our economy, hobbies and culture, and an important part of our coastal and ocean ecosystems.

Because we are all connected to the nation’s coasts, our activities have many effects on estuaries, many of which are negative.

Why are Estuaries important?

Our bimonthly newsletter contains information about upcoming events from SHEA and the NH coast.

Check out some of our past newsletters here.